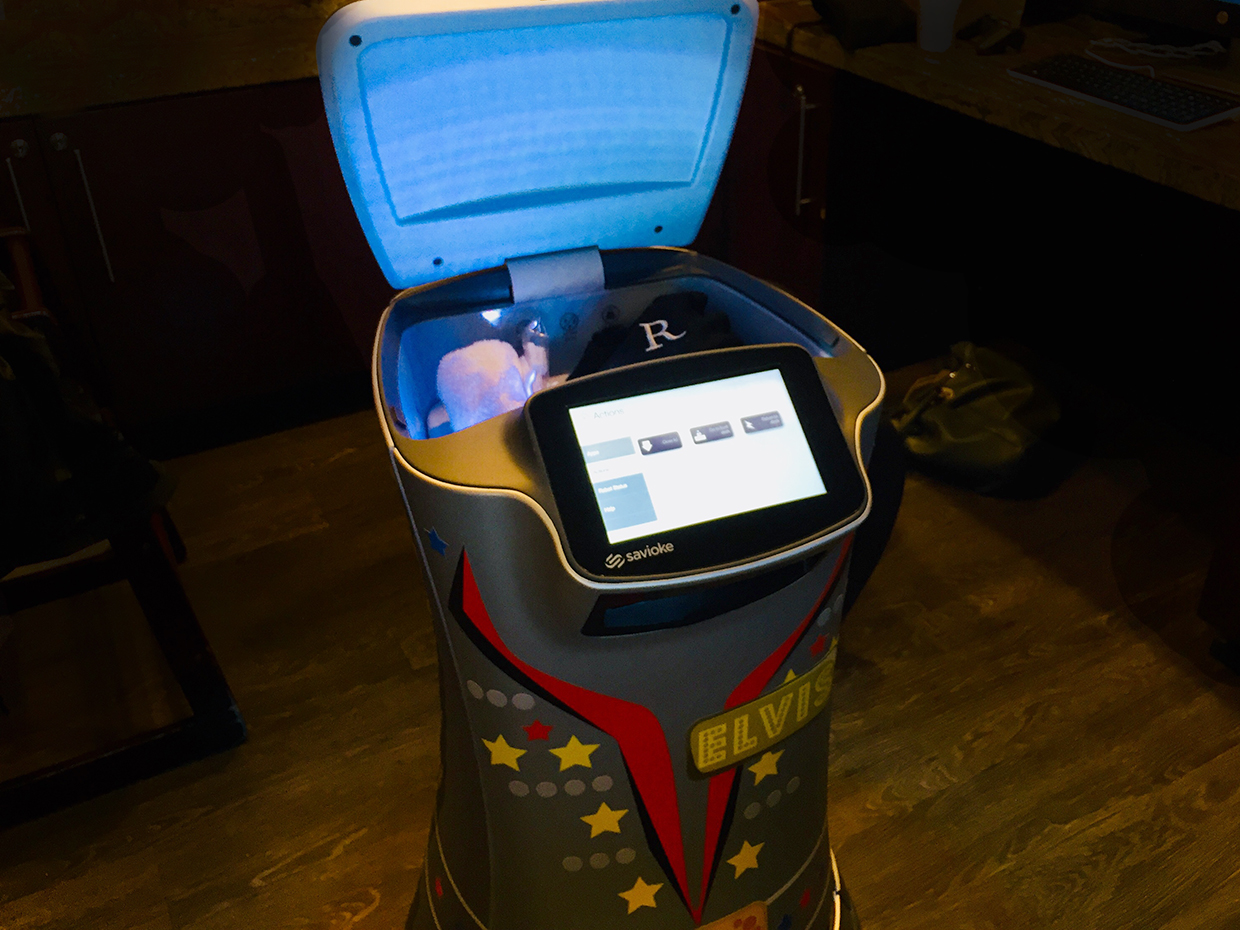 
On the floor of CES, LG’s CLOi service robots got a lot of attention. But just across the parking lot from the Las Vegas Convention Center, two service robots—both Relay robots from San Jose-based Savioke—are quietly at work. These robots, tagged Elvis and Priscilla, are full-time employees of the Renaissance Hotel, and they aren’t getting a lot of attention.

When Priscilla navigated through the crowded lobby to make a delivery on Wednesday, only a few people pulled out cameras. Others casually brushed by, sometimes giving it a little pat as they passed.

I checked in with Savioke founder Steve Cousins, hotel manager Carl Kruger, and robot Elvis, to find out how these robotic workers are doing. (Elvis was taking a break from his duties for media meetings, but Kruger wasn’t sure how long Elvis could hang out. “The front desk wants him back,” Kruger said.)

Cousins says Savioke currently has robots in 70 hotels, including the two at the Renaissance.

“Guests are almost shocked” to see a robot at the door, Kruger reports. “We don’t tell them ahead of time that a robot will be making their delivery. They typically open the door and freeze for a moment. Then they’ll read the instructions, push a button—and often giggle.”

These armless robots can’t actually knock. Instead, they robo-call (pun intended) the hotel room and tell the occupant that a delivery is waiting at the door. Elevators are also a challenge—one of the hotel elevators has been adapted to allow the robots to communicate with it wirelessly.

“We have them send up towels, toothpaste, the newspaper, and room service,” Kruger says. He thinks they are at least as fast—if not faster—than human workers. And, he says, the front desk employees, who are responsible for getting things to guests quickly, love them.

Both Kruger and Cousins were thrilled about how well the robots were handling the extreme crowds that CES brings to hotels.

“Priscilla is doing surprisingly well in the crowd. She lets people pass, goes around them—sometimes they give her a pat when she goes by, like you would pat a dog,” Cousins says.

And the robots are developing a fan base. “One little girl and her mom came down to the front desk and asked for Priscilla,” Kruger said, “a day after she’d done a delivery to their room. The little girl just wanted to say hello.”

digiblitzmedia January 14, 2018 Life Science No Comments »
Soon We Won’t Be Able to Tell the Difference Between AI and a Human Voice
How Blockchain Could Revolutionize The Internet Of Things